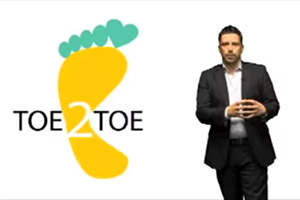 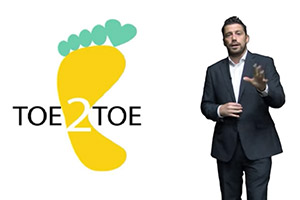 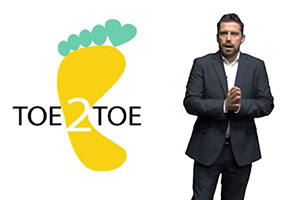 Our partnership with Accueil Bonneau allows us to perform seamless distribution to the homeless people of Montreal who need socks the most. Our deals with sock manufactures allow us to purchase pairs of socks for less than 50 cents.

Toe2Toe has teamed up with many establishments such as local high schools, universities and a wide range of strong organizations. Toe2Toe has helped run several very successful sock drives to collect socks for the homeless.

Toe2Toe founder Chris Costello has been traveling to various community groups over the last two years presenting on the importance of proper footwear for the homeless. Raising awareness is an important aspect of the initiative.

A little bit about us

Toe2Toe, partnered with Accueil Bonneau, is a Montréal based initiative that solicits donations from secondary, post-secondary schools, universities and the general public in an effort to provide adequate footwear to the homeless of Montreal. Created in 2014 by founder Chris Costello, Toe2Toe has raised thousands of dollars and collected more than 15,000 pairs of socks for the homeless.

You can help!
Socks are the most requested items for the homeless, but it is the least donated item to the homeless population.
A simple pair of socks has a huge positive impact on a persons life.
All donations are used to buy socks at a low fixed price straight from the manufacturers.
Receive a tax receipt immediately after donating money online for our cause at Toe2Toe.

This is just the beginning for Toe2Toe. We’ve collected roughly 15,000 pairs of socks last year. We want to double that amount annually by maintaining an inventory of 30,000 pairs. Help us by donating to for this wonderful cause! Receive a tax receipt immediately after donating money to our cause.

DOLLARS RAISED FOR TOE2TOE IN 2017

SOCK DONATIONS
FOR TOE2TOE IN 2017

We're TOE2TOE. We’re here for your money, or your socks or both if you can spare them. But mostly we’re here to help you do a little good for a lot of people.

Toe2Toe’s mission is to collect and distribute new socks for the homeless population of Montreal.

Toe2Toe’s vision is to have new socks immediately and reliably available to all individuals in the homeless population of Montreal.

Toe2Toe’s Values
Montreal’s homeless population having access to new socks, a fundamental need in self care and physical health.
The connection between appropriate self care activities and the overall health of all individuals.
All of Toe2Toe’s actions are executed with integrity, accountability, community involvement.
Toe2Toe endorses research and evidence based practice in all planning and execution of activities.
To address public health issues, Toe2Toe endorses community education, involvement and inclusiveness.

While Byer, 35, recognizes that giving money or donating clothing to the needy are among some of the most...
28 Feb 2019
Posted by: admin

At Saturday’s home football game vs. McGill, QB Trenton Miller and the rest of the football team will collect...
28 Dec 2016
Posted by: admin

Sometimes, it only takes one experience to change a perspective on life. This was the case for medical student...
17 Nov 2016